The Italian Harpsichord III library features an instrument built around 1690 by an anonymous maker. Featuring three sounds - a front and a rear 8' register as well both together - it allows for the traditional rich and slick Italian harpsichord tone, offering additional flexibility by choosing the adequate 8' or using the gentle 2 x 8' combination with its inspiring and complex harmonics. 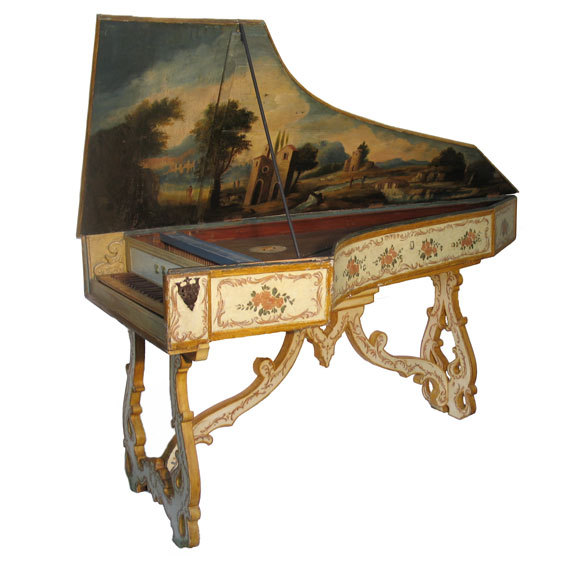 While it is very typical for the Italian style to feature a housing seperated from the painted cabinet, this instrument is one of the rare Italian harpsichords with a fixed housing. Instead, it belongs to the category of so-called false inner-outer instruments: The edges of the body as well as the offset cheeks are used to pretend that it features a separate housing.

After more than 300 years, the harpsichord still remains in well-playable condition despite its age. It is now available for your sampler, presented in its original Kirnberger III-tuning at 382 Hz, capturing all three register variations - front 8', rear 8' and both 8' registers together. Presets at 440 Hz are also available. The harpsichord features a so-called "short octave" in the lowest range, assigning some keys to lower notes and thus giving the instrument an extended range in the bass (at the cost of other bass notes).

Up to now, many keyboards and samplers represented harpsichords by repeating the exact same digital sample. In order to avoid the problem, we captured every sampled register with 8 variations per note.

The key release sounds are also of major importance: We recorded 4 release samples per note. In addition, the library contains an essay in German by Andreas Beurmann, explaining the background of the instrument.

For recording, we employed custom-made Wagner™ U47w® tube microphones with Crane Song™ Flamingo® preamps and Universal Audio™ 2192® digital converters. The samples were recorded at 192 kHz/24 bits, downsampled to your resolution of choice.